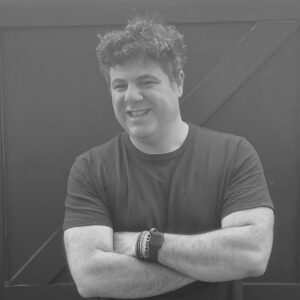 Nicholas D. Mennuti is currently the Narrative Strategist and one of the founding partners of NeoText, a new site dedicated to publishing outstanding cultural commentary and genre fiction in novella form, two of which “Sorcerers” and “DNA”, have been purchased for development by AMC and Simon Kinberg’s Genre Films. Nicholas will serve as the executive producer on “Sorcerers.” Additionally, Nicholas’s own novella “Scrap” will be published by NeoText in 2021, featuring accompanying art by renowned stylist Howard Chaykin (Wolverine, Blade, Iron Man.)

Previously, Nicholas was the writer of the espionage thriller “Weaponized” (Mulholland Books/Little Brown) which had film rights purchased by Universal Pictures and Scott Stuber. His short stories have appeared in Agni, Zoetrope, and Conjunctions, and he has written about the intersection of technology and entertainment for the Huffington Post. Nicholas is a graduate of the Tisch School of the Arts Dramatic Writing Program.