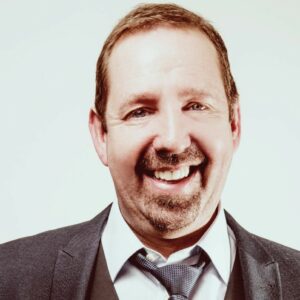 Alfie is an experienced and versatile humorous speaker, presenter and comedy writer with his distinctive niche area as a recently retired police sergeant.
He has written and presented four series of his BBC Radio Four comedy It’s a Fair Cop which received both public and critical acclaim – being described by the Daily Mail as “offbeat, revealing and very funny”. The show was a shortlisted finalist in the Best Radio Entertainment category at the UK Comedy Awards 2018. The show’s fifth series aired in Spring 2020. Alfie was also one of the stars of Show Me The Funny (ITV) and wrote and presented Alfie Moore’s Almanac for BBC Radio. He has been featured on Comic Relief, as a pundit on Sky News, BBC Radio 4’s Idiots Guide to Crime and Punishment, Bizarre Crime (BBC 3), Confessions of a Police Officer (Channel 4) and in 2017 joined the presenting team of Criminals Caught on Camera (Channel 5).
He has many times written and performed solo shows at the Edinburgh Fringe Festival, including I Predicted a Riot and his critically acclaimed show about gambling Viva Alf’s Vegas. During August 2014 he debuted The Naked Stun in Edinburgh where it sold out for the full month of the Festival run and was subsequently toured both nationally and internationally. His 2015 show A Fair Cop Stands Up was nominated for Best Comedy at the Buxton Festival and sold out in Edinburgh. He has just completed a tour of his deliciously dark stand-up comedy show Getting Away With Murder. His newest tour, Fair Cop Unleashed, will run from October 2020 into 2021.